July 12, 2010
Hello there, timeout muna tayo sa articles on food. One of my "colleague-friend-boss" is currently in Paris right now for his vacation. He ask me what I want from Paris before he left the office off to the airport, I told him nothing but on second thought I told him I want photos of him in Paris. Why not? It is nice to see the place in friends photos on real time and not in post cards. As promised, he send me this first picture standing in front of the Eiffel Tower yesterday. 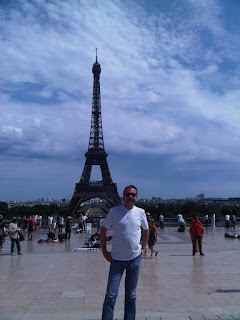 The sky looks so radiant, the weather seems to be so beautiful. One day, I will visit Paris and I will take my photo on the same spot. :) He is the guy who send me the photos, isn't he handsome (wink) single pa yan!
He send me more snaps today. Here they are 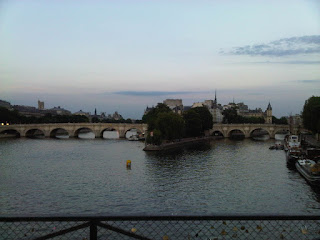 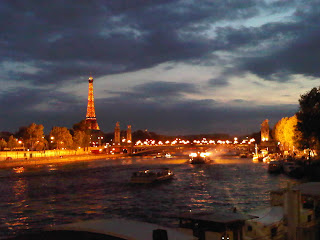 What an awesome view of the river, the sky and the golden city and tower 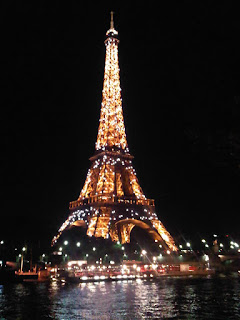 The Eiffel Tower at night-this was taken last night
Photos courtesy of Maher Safadi from his BB, a big thanks from me and Yellow Bells. I do hope you enjoyed your vacation and you have a good time. We will see you soon.
Info by Wikipedia
The Eiffel Tower (French: Tour Eiffel, (, nickname La dame de fer, the iron woman) is an 1889 iron lattice tower located on the Champ de Mars in Paris that has become both a global icon of France and one of the most recognizable structures in the world. The Eiffel Tower, which is the tallest building in Paris, is the single most visited paid monument in the world; millions of people ascend it every year. Named after its designer, engineer Gustave Eiffel, the tower was built as the entrance arch for the 1889 World's Fair.

The tower stands 324 m (1,063 ft) tall, about the same height as an 81-story building. It was the tallest man-made structure in the world from its completion until the Chrysler Building in New York City was built in 1930. Not including broadcast antennas, it is the second-tallest structure in France after the 2004 Millau Viaduct.


The tower has become the most prominent symbol of both Paris and France, often in the establishing shot of films set in the city.

December 14, 2016
One of the favorite things we like to do at this time of year here in Dubai is to go on a desert camping. Imagine full day sun, clear blue skies, cool breeze, .00001 percent chance of rain while in a beautiful desert landscape. It's a camper's dream. Same time last year, we camped at  Al Aryam Island in Abu Dhabi , also a perfect camping spot. This time around, we didn't go far. We drove just 45 minutes to Al Qudra Lakes inside Saih Al Salam Desert, on the outskirts of Dubai. Al Qudra Lakes is a man-made lake that spans up to 10 hectares and home to more than 100 species of birds including migratory birds. A wonderful place to camp with family and friends We used the Waze app to get there. The only problem was, once you reach the area, it was difficult for the app to help you navigate. We were already going in circles, good thing we luckily found our friends who came early to set up camp. It was dark as there is no lamp post, there is no signage either so it is
1 comment
Continue reading »