September 29, 2011
Dubai is an open city and people have freedom to do what they want and need to do as long as it won't disturb public order. Rules are rules here, strictly implemented so you don't want to be messing up with anyone of the countries rules and laws or you will end up getting deported to your home country or worst you will land in jail. For most of the thriving expats here, we are already aware of what I have stated above but for new comers it is important for them to know this. Dubai goverment is serious with its rules unlike in any other parts of the world  where some are still able to getaway with the silly things they are doing. In here, every building, establishment and public transport has an intalled camera to monitor people's every move.


Why am I talking about these things? I was at the metro station yesterday and I noticed a lot of red buttons scattered in all of the escalators and walkalators. It reads " Emergency Button Penalty for Misuse 2000 Dirhams". Who would want to do that with its hefty fine but I had this naughty thought that what is going to happen to me if I dare to push that button? I was laughing at my own thoughts and then I looked around the station and at evey corner, CCTV cameras are intalled so if I will do what I was thinking, 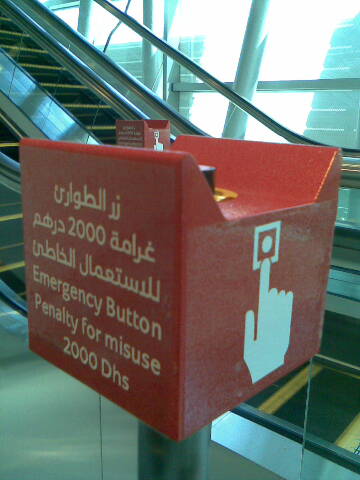 I would hardly getaway with it. of course I am not going to do it, it is just a thought and maybe if I am still a teenager with no responsibilities, I might dare but if I am going to do it, this is definitely not the place.

Have a safe weekend, everyone.